Airport s-x position made me to get pregnant, lady explains se-x style [Video] 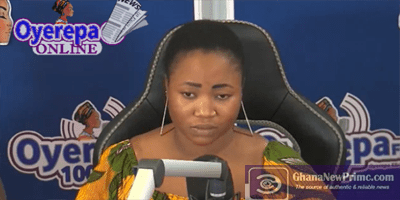 S-x nowadays has become more or less like a game that is played by individuals of all ages.

People nowadays don’t care about the person with whom they’re having an affair; what counts is the thrill of it.

As a result, numerous people have invented methods of naming various s-x positions depending on their perceptions.

Theresa, from Bantama in the Kumasi Metropolis, is a clinical example of a lady who has experimented with many sex methods and has a lot of expertise in the act.

Surprisingly, Theresa claimed on Oyerepa Afutuo that she has acquired several s-x methods on Facebook, which she often practices in bed.

The s-x positions and techniques of Theresa

Theresa revealed on the show that the sex positions below are her greatest ever, and that number 3 earned her a lovely baby girl after she performed it with Akwasi Addai alias Ogana, a Bantama cordwainer.

Theresa mentioned that her favorite s*-x position or technique is “Airport,” and she had a lovely daughter as a result. However, the baby’s father (Ogana), who also happens to be someone’s spouse, has refused to look after the child after she abandoned him.

Broken Heart is Real: Guy cries uncontrollably after his girlfriend dumped him [Video]

If a lady shows these 5 behaviors, it means she truly Loves You.

If a lady shows these 5 behaviors, it means she truly Loves…