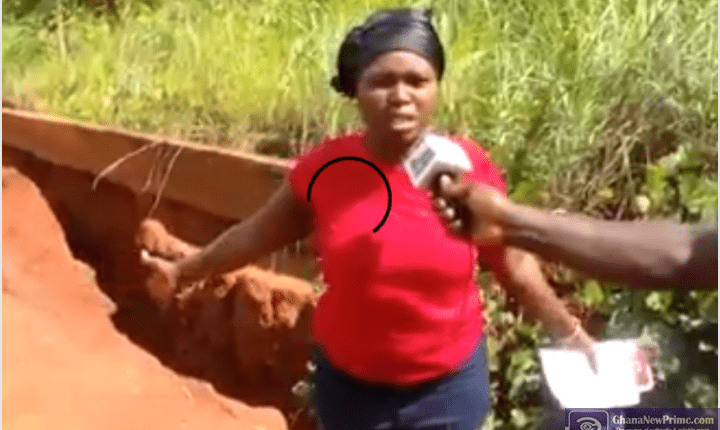 A young lady believed to be in her late twenties has blamed her spinsterhood on the fact that the road leading to her village Amoma is in a very deplorable state.

According to her, men do not enjoy coming to her hometown to date her and her other colleagues because of the poor state of the road and that has had a negative toll on her life and relationships.

In the video which has since gone viral on social media the young lady who is a resident of Amoma, a community  in the Kintampo South District indicated that life has become very unbearable for people living in her community.

She mentioned that armed robbers have taken advantage of the situation and rob users of the road of their valuables.

She reminded the government of the need to fix their roads so that young ladies in the community can have access to them and marry them.

READ ALSO  How to disable adblockers?

“Look at a beautiful woman like me I’m single and no man wants to marry me. The men who come here do not want to stay because the roads are bad. Just have a look at our roads, it’s not in the best of shape. The men do not want to come here because armed robbers have also taken advantage of the bad situation and they rob commuters of the road. They take their valuable items.”

Ghananewsprime.com  reported in 2018 about the state of roads in the District, however, our checks reveal that nothing has been done about the roads.

Residents in the area say they have given up on the leadership of the country because they do not care about their plight as a farming community.

READ ALSO  If you die for NDC, the party will also die for you – Mahama to supporters

Their shock is that even the New Patriotic Party(NPP) that has benefitted immensely from their votes have failed to come to their aid in addressing issues with regards to their roads that have affected the economic life of the community.

Watch the full video Below