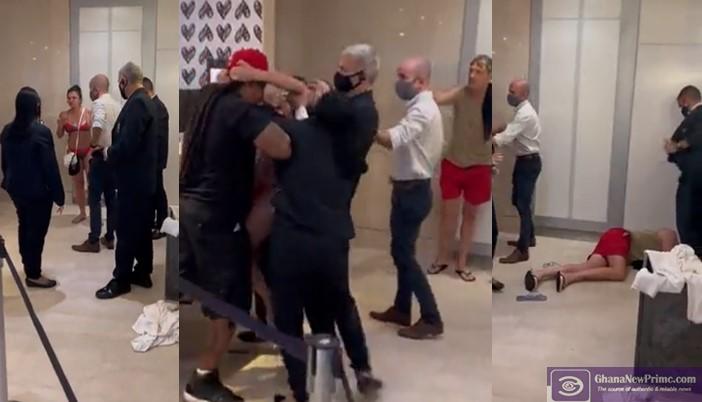 Black man knocks out husband of racist white woman with a single punch.

A recent encounter between a black man and a Caucasian woman went tragically for the white woman’s spouse.

Both the white couple and the black man stayed at the same hotel. The receptionist was focusing on the male first, but the white woman requested that they focus on her first.

In a popular video, she attacked the man while making a scene, but he was able to break himself from her clutches and deliver a devastating punch to the woman’s husband, knocking him out instantaneously.

In the background, the person recording the drama could be heard saying that the woman should be restrained.

The furious lady then attempted to assault the black man once more, but hotel personnel urged him to leave quietly as they attempted to control her.

Woman accompanied by her hubby attacks black man, a silver member of the Hilton Hotel, for being served ahead of the couple.

Too many Karen incidents in the U.S.pic.twitter.com/OsKUWFyaYt

Pretty Nigerian lady admits she’s a bricklayer, shows off her job in a video.

Two days after becoming viral for “fake driving,” she receives a new car as a gift [Video]