The death of a police officer, Inspector Alfred Afortey Armah as rumoured he was poisoned by unknown person has been confirmed by the Bono Regional Police Command that the deceased contracted the COVID-19 disease.

This was confirmed in a release signed by the Deputy Bono Regional Police Commander, ACP Baba Saanid Adamu. 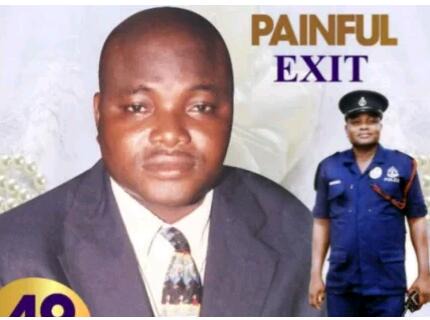 The release which was to disregard a video circulating on social media that some police officers from the Bono Regional Command have been poisoned through a drink causing the death of the said police inspector indicated that Inspector Alfred Afortey Armah died out of COVID-19 and not drink poisoning.

READ ALSO: GNP: Pokuase, Kanda And Other Places To Go Off Power From Now – ECG

According to ACP Baba Saanid Adamu, Inspector Armah was admitted at the Brong Ahafo Regional Hospital but passed away on February 5.

He said, according to medical officers at the facility, his death was a result of COVID-19.

The Police had however earlier denied when news came out that the officer died of the Novel Pandemic until the release.

The Bono Regional Deputy Commander for the Police is however entreating the general public to ignore the circulating poisoned video on social media.

The Bono Deputy Director for Public Health Dr. John Ekow Otoo says the Sunyani Municipality has the highest number of COVID-19 cases in the Bono Region.

He said they have recorded 69 positive cases in the Sunyani Municipality and they have also taken some samples to the lab and are awaiting for results.

According to him, currently, the region is having 765 recorded cases with 659 recovered and 98 active cases of which some are being managed from their homes with eight deaths.

He said, the Regional Health Directorate (RHD) and other agencies are working together to contain and prevent the further spread of the disease.

He said, one of the challenges identified was lapses in contact identification, listing and tracing of dead Covid-19 patients hence they are putting in much effort by identifying the next of kin of the dead patient who will assist them in the contact tracing.

Dr. John Ekow Otoo stated that initially, the region wasn’t having many Covid-19 cases hence they were not having more contact tracer but now the cases are surging they have activated most of the contact tracing teams. He, therefore, urged health facilities in the region whose isolation centers are not up to standard to liaise with the assemblies to help them get a standard one.

Meanwhile, the sanitation giant, Zoomlion Ghana Company Limited has been disinfecting and fumigating various police offices and quarters in the country to help contain the spread of the virus in the police unit.

Ghana on course to achieve herd immunity against COVID-19

Ghana on course to achieve herd immunity against COVID-19