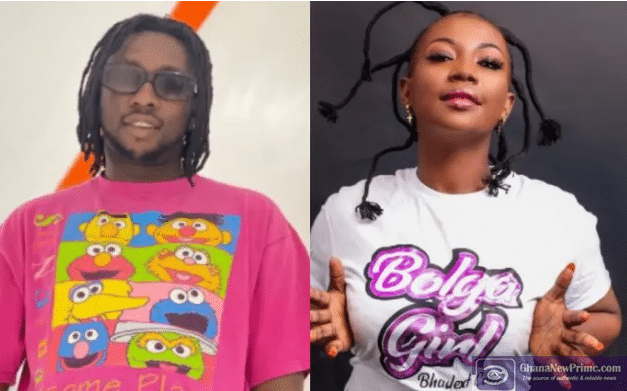 Ghanaian female singer Bhadext Cona disclosed that the middle man (El Baby) between her team and Kuami Eugene threatened her to drop her version of the song under contention(copied music video).

Bhadext Cona appeared on Onua FM Anigye mere, Saturday, 13th November 2021. She then revealed that the middle man called one of her team members and threatened him.

“We went to an interview at a different radio station. I took my phone to check out the calls I had missed just to realize that El baby called me 25 times. So I ignored it and went home. Then a few minutes later, he sent me a message saying that he knows where I stay. So it is better for me to answer his calls before he comes there with people. So I called back to know the reason why he has been calling me 25times. He told me this, ‘Drop the content before it’s too late.”

According to her, El baby Life, the host of Bryt tv top 10 charts, approached her team member Yaw Dollar with the promise of getting them a feature from Kuami Eugene.

Bhadext Cona also explained why she believes her music was stolen rather than receiving a feature from Kuami Eugene.

“The middle man told us that Kuami Eugene said he will charge us ten thousand Ghana cedis for the feature. So we had to bargain to eight thousand. The next day El baby texted me for my social media handle. That is IG, and I gave it to him. Later he told me that Eugene said my followers are less. So he can’t do the featuring.”

The Bolga singer said she was stunned to see Kuami Eugene using her work and decided to hit back at him. As a result, she also plagiarised the concept of Kuami Eugene’s Bunker music video and turned it into her own. She went viral online after a collage of the two music videos popped up online, comparing similarities. There were some slight differences in Bhadext Cona’s video, but it was clear that there was a clear case of ‘copying’.

Kuami Eugene’s Bunker video was released some 3 weeks ago. It is flying high on YouTube with over 1.3 million views aside from reactions and comments.

Apply and leadership will consider your return – Otokunor to Konadu