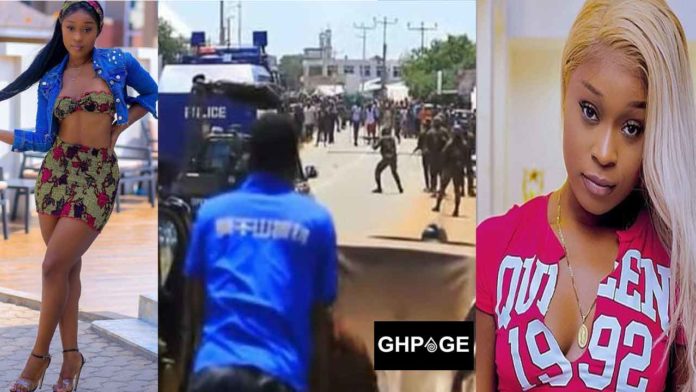 Ghanaian actress and video vixen Efia Odo has taken a swipe at some Ghanaian celebrities over their silence on the Ejura shooting.

In a post on social media, Efia Odo expressed her displeasure about how some celebrities have decided to be mute on the killing of protestors.

Efia Odo, who is an active convenor of the #FixTheCountry campaign indicated that these celebrities are quick to be vocal on international issues but have remained silent about similar issues happening in their country.

According to the actress, it’s very pathetic how some celebrities are pretending not to see what is happening in Ejura.

She wrote; “Some celebs will be quick to hashtag international issues. Their own people dey bleed but they’re behaving as if they haven’t seen. Your fans are dying and you’re mute. Pathetic!!”

A few days ago, 2 people were shot dead and several others injured following a clash between the youth and military in Ejura over the murder of social media activist Ibrahim Muhammed.

According to reports, the military men stormed the neighbour to calm the youth who were demanding justice for Ibrahim popularly known as Kaaka.

The angry youth pelted stones at the security personnel deployed at the area, who in turn, opened fires on the crowd.