Everyone can not be a lawyer – Tsatsu Tsikata 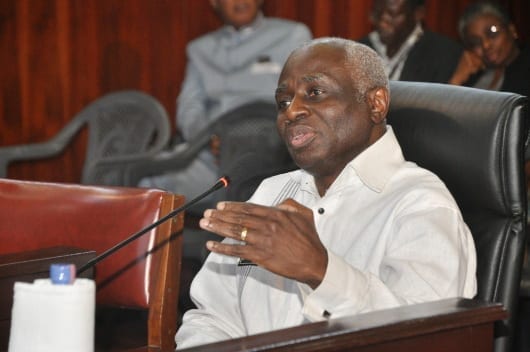 • Tsatsu Tsikata says other professions need the spotlight lawyers are getting

• He said everybody cannot be a lawyer

Celebrated Lawyer, Tsatsu Tsikata, has said it is unfortunate that kids aspire to be lawyers only because the legal profession was displayed live on TV to trigger their interest.

According to him, there should be a spotlight on other professions so that young people can have the opportunity to aspire to be in those professions as well.

GhanaWeb monitored Tsikata’s explanation on Citi TV, Sunday evening, “I remember in 2013 when the whole Election Petition was being shown on TV every day, I used to say to people that, I’m not too comfortable about the situation where every day, young people and so on, all they’re seeing is lawyers, lawyers because I would like the opportunity for other professions to be spotlighted in such a way that young people can have an aspiration to be in those other professions…”

“Everybody cannot be a lawyer…,” he stated.

He indicated that teachers, for instance, play a huge role in the life of an individual, therefore, no matter who you become in life, “all of us are indebted to our teachers”.

Tsikata stated that, as an individual, he has always held his teachers in high esteem and even before he moved to Mfantsepim for his secondary education, one of his teachers who had just finished Wesley Girls Senior High School encouraged all the students in the class to go to secondary school.

“Most significantly, the headmaster in Mfantsepim at that time, F. L. Bartels, an incredible educationist, because he came across in such a commanding presence. He spoke well both English and Fante and teachers have that kind of impact on your life and I always have to honour that,” he said.

Tsatsu Tsikata was one of the lawyers for the defendants in the 2013 Election Petition where the opposition had filed a petition at the Supreme Court to challenge the election of former President John Dramani Mahama as the President of Ghana.

Everyone can not be a lawyer - Tsatsu Tsikata
0
Share FacebookWhatsAppTwitterPinterestTelegramEmailReddIt