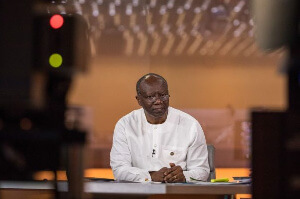 According to the Finance Minister, the move was to deepen the technological entrepreneurial ecosystem for Ghanaian entrepreneurs.

Addressing the country on the measures being introduced by the government to prop up the economy and create jobs for the youth in line with social media campaign protest dubbed “FixTheCountry”, Mr Ofori-Atta said aside Google setting up its regional Artificial Intelligence Centre in Accra, Twitter recently announced to establish its Africa Headquarters in Accra.

He said the decision of such global tech giants to come to Ghana demonstrated the confidence investors had in the Ghanaian economy.

Mr Ofori-Atta said the presence of Amazon in Ghana would help create jobs for the youth and prop up the Ghanaian economy.
He said since assuming office, the government had worked hard to put the economy on a better footing and positioned it to be hub of trade in Africa.

Mr Ofori-Atta indicated that the country won the bid to host the Secretariat of the African Continental Free Trade Area (AfCFTA), positioning Ghana and Ghanaian businesses as the gateway partner and spearhead Ghana as a hub for the Africa region.

“Until we were hit by the COVID-19 pandemic in March 2020, we were on course to achieving the objective to stabilise and grow the economy, create jobs especially for the Youth, modernise, digitise and formalise the economy, provide social protection for the vulnerable and create a safe and secure environment for citizens and businesses to thrive,” the Finance Minister said.

Mr Ofori-Atta opined that the government implemented flagship initiatives such as 1 District 1 Factory, 1 Village 1 Dam, Planting for Food & Jobs, and IPEP in the Real Sector to accelerate economic activities and help create jobs.

The Finance Minister said the government as part of measures to transform the economy, implemented several initiatives to digitalize the economy.

Finance Minister mentioned some of the initiatives as the issuance of over 15 million National ID Cards, the digital addressing system for over seven million homes, mobile money payment interoperability system, and the introduction of the paperless port system.

“After four years of implementing these prudent measures, the Ghanaian economy witnessed a turnaround. Between 2017 and 2019, the economy grew by seven per cent on average in response to Government’s prudent management of the economy and implementation of government flagship programmes, being one of the highest and sustained growth periods,” the Finance Minister stressed.

The Finance Minister pledged that government would continue to work to put the economy on a better footing and bring relief to the citizens.

Pregnant women carried on wooden board to Hospital