At the end 90 minutes plus 5min of action, the phobians had a one-goal victory over the home side. The only goal scored by Obeng Kwadwo Jnr on the 25th minute of the first half. 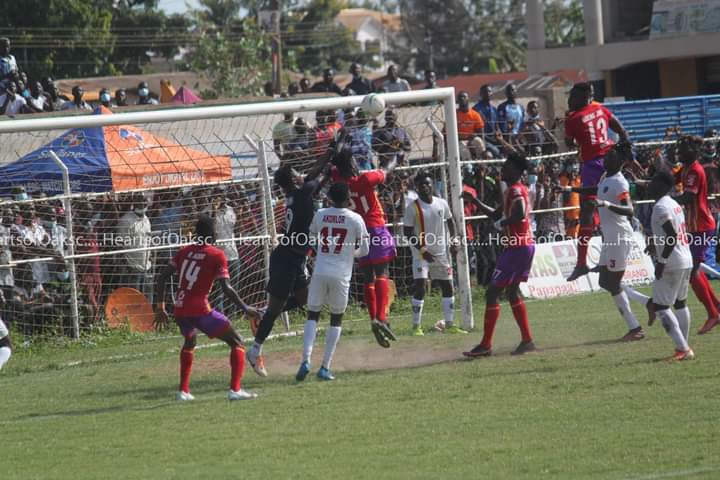 About 4 seasons Hearts of Oak have not lead the Ghana Premier League table. Their win has move them to top of the League with 46 points followed by Asante Kotoko.

I bring you a game Summary in case you couldn’t watch the match.

RELATED   #BringBackTheLove: The love for GPL is back at the Accra Sports Stadium Ahead Of Hearts Vrs Kotoko [Video]

1” Referee blows his whistle for the start of the game.

7” Wonders make an incursion but ball well dealt with by Isaac Mensah.

10” Isaac Mensah fires one at goal from a distance but goalkeeper for 11wonders pushes it to safety.

11” Jonnah Ayeetey clears the ball from the line to stop Hearts from taking the lead.

13” Well lobed ball by Caleb but the connection from Nettey was poor.

20” Freekick awarded against wonders for an infringement on Salifu.

He puts Hearts ahead with a simple tap.

A first half goal from Obeng separates the two sides.

52” Isaac Mensah applies pressure on the defense of wonders resulting in a corner.

61” A through pass to Asamoah but a timely intervention from captain Fatawu stops him from getting the equalizer.

Afriyie takes over from Nettey

65” Freekick awarded Wonders at the edge of the Hearts penalty box.

Ghana pays the Highest winning bonus in the world, $15,000

Messi to play his first match for PSG against Reims

BREAKING! The deal is seal as Cristiano Ronaldo moves to Manchester City

Ghana pays the Highest winning bonus in the world, $15,000

Messi to play his first match for PSG against Reims

BREAKING! The deal is seal as Cristiano Ronaldo moves to Manchester City

"Vote For Me, I Will Not Promise and Fail Like Nana Akufo Addo" - School Prefect Aspirant Boldly Says In Manifesto, Video Goes Viral