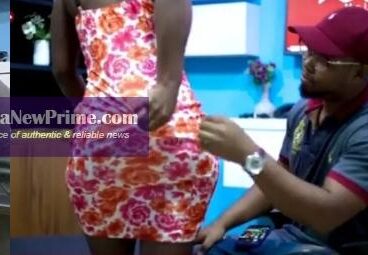 Host touches the goodies of a female Musician on live TV to confirm her claims.

In a video sighted online, a host of a program boldly stretch his fingers in between the thighs of a female guest to confirm a claim she was making during a live interview on TV.

This was a very shocking moment for his viewers because they didn’t expect such scene from the program.

The host is popularly known as “Poleeno” and he does interviews with entertainment industry personalities. In an interview with one of the upcoming female musician name “Empress Vee”, the lady spoke about some of the uniqueness she has which differentiate her from her colleague artists.

She spoke to an extent and made a point that she does not wear underwears.

The host became surprised as asked why that is so, she replied saying that it is just a normal thing in their family because all her close female relatives including her mom, sisters, unties, and any other female members do not wear them.

But instead, the host found what she was saying so wondering and curious. He continued in an argument with the musician for minutes till she got up and turn her heavy backside to the camera men for them to confirm if they can see any traces of her underwear drawn on the outfit she was wearing, and they said no there isn’t.

The host was still not satisfied with the answers from his camera men and asked the lady to allow him make his own confirmation.

He told the lady to fold up her outfit and open her thighs, which she did. The host stretch out his fingers and push them inside her “Toto” during the live TV program to confirm her words.

The reactions from the views suggest that the host’s behaviour was needless whiles the lady herself is a disrespect to women as a whole.