In a horrifying accident in Akomadan, 30 people died and ten others critically injured. 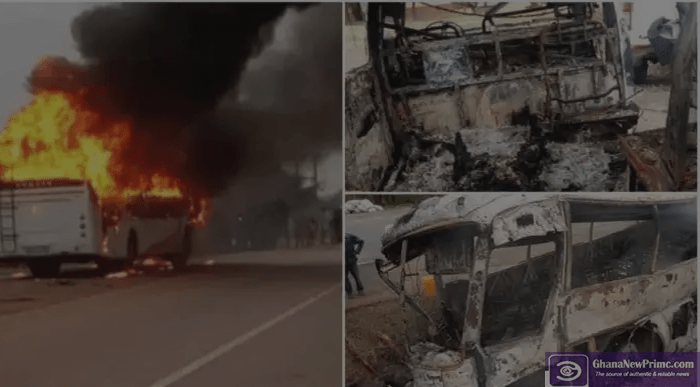 In a horrifying accident in Akomadan, 30 people died and ten others critically injured.

A bus from Lawra in the Upper West Region collided with a stalled car near Akomadan in the Ashanti Region, killing thirty persons.

The vehicle, which was carrying 37 passengers, caught fire, with 30 of its occupants dying as a result of the bus colliding with the vehicle at an Akomadan Police Checkpoint.

According to a source, the vehicle carrying 37 passengers collided with an abandoned vehicle at the Police checkpoint.

When the motorist, who was travelling at full speed at the time, reached the improvised checkpoint, he was forced to hit the brakes, according to an eyewitness called Kwasi.

“He couldn’t break quickly because he was going too fast,” he explained, “and collided into a stationary car at the barrier, resulting in the collision…”

According to Kwasi, the car caught fire after the collision as a result of the hit. In a horrifying accident in Akomadan is very bad…

“The force of the accident was so strong that those of us who were asleep awoke and began crying for help when the fire broke out in the front…,” he explained.

He went on to say that roughly ten individuals were able to flee via the glass pane.

Meet Willian Otoo, A Community Nurse Who Assisted A Woman To Deliver In The Middle Of A Poor Road