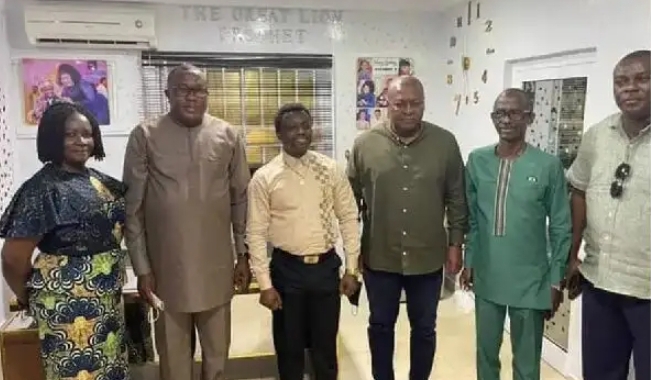 There is speculation on social media whether John Mahama and the top leadership of the National Democratic Congress are exploiting the ordeal of Rev. Isaac Owusu Bempah and To ignite an old rivalry between him and Prophet Ebenezer Adarkwa Yiadom Prophet 1.

This is after John Mahama rounded up a segment of his Ashanti Region Thank you tour at a radio and TV station belonging to Prophet 1. A rare development since the former President has never had an interview there whether as President or an opposition figure.

Recently, Prophet 1 and Isaac Owusu Bempah, the Nation’s Prophet clashed over petty “anointing” disagreements. Leading to the two top pastors slugging it out on who is most powerful.

Mahama to register as ‘’Polling Agent’’ in 2024 Presidential & Parliamentary Elections

On Monday, the three-time Presidential Candidate of the NDC was on Radio Mercury for a one-on-one interview. And before visiting the Manhyia Palace to pay a courtesy call on the Asantehene.

This comes at a time Prophet 1’s archrival Isaac Owusu Bempah is caged in police cells. And is expected to be held there for at least 5 more days from today.

The two-day tour of the Region will mark the end of the second phase of his tour. Which is meant at expressing gratitude to his supporters and members of the NDC for the votes in the December 7, 2020 elections.The first phase of the tour began in August with a resumption on Tuesday, September 7 in the Bono East Region.

In the Ashanti Region, former president Mahama’s first port of call was the Ejura Constituency. Where he interacted with party faithfuls at Mfrante. And made a donation to party members who had an accident before the 2020 election.

READ ALSO  I can remove Akufo-Addo from office; he can’t remove me – Alban Bagbin

How to Make Your Woman feel So Loved, 3 Gestures.

Is Yaa Jackson Really The Hottest Kumawood Actress? Checkout Her Hot Photos As She Shows Her Shapes

How to back up your data and keep it safe and

Pregnant police officer shot and killed in front of her family: report

How to get free bitcoin in 2021 in Ghana