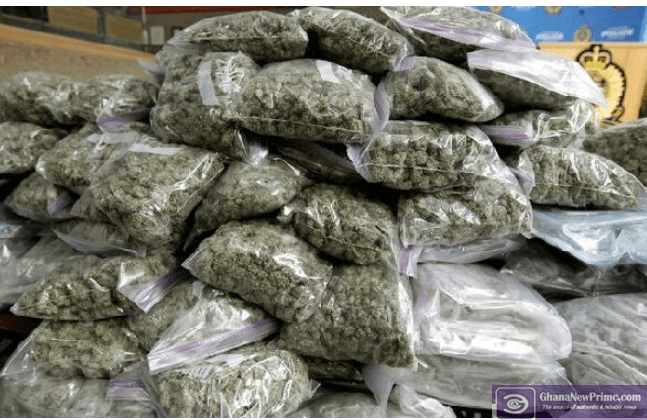 Three suspects have been arrested at Grumah-Line, a suburb of Kintampo in the Kintampo North Municipality of the Bono East Region by the police with a bag and parcels of dried substance suspected to be Indian Hemp popularly known as “wee“.

Last Wednesday night operation by a selected team of police, according to the Kintampo Divisional Police Crime Officer, ASP Edmund Agyemang Badu was carried out following an intelligence they picked from concerned citizens.

In an interview with Kintampo Radio’s Abdul Rahman Shaibu on Friday morning monitored by Ghananewsprime .com  ASP Agyemang Badu disclosed that the suspects, including a wife and brother of a certain man believed to be the prime suspect, were among the three suspects.

The prime suspect who ASP Badu described as the main “dealer” and some other suspects were still on the run and efforts were being made to get them arrested.

“As part of our recent operations to clamp down on crime in Kintampo and its environs, we picked up intelligence that some group of people was engaged in both wholesale and retail business of Indian Hemps and we decided to go there. When we arrived at the scene, we saw a charcoal bag full of the substance with some wrapped in small pieces which they sell to their customers. The wrapped ones were about 46 pieces. In fact, we bought some ourselves” He disclosed how the operation was carried.

He continued, “we arrested three suspects; the wife and brother of the alleged dealer inclusive”

Crime in Kintampo over the years, especially, armed robbery, burglary and other forms of stealing has been a major concern for residents. Efforts by the Kintampo divisional police command to clamp down on the crime situation has led to the arrest of many law offenders some of whom have been prosecuted and sentenced while others are currently on trial in various courts in the Bono East and Bono regions

The latest arrest follows after an operation by the Kintampo police last month ( September 2021) that led to the arrest of one of their own, Corporal Christian Adjei at kyeremankomah, a suburb of Kintampo, from whom suspected substance believed to be Marijuana, a stolen motorbike, some AK-47 rifle ammunition, a body amour and a dead body bag among others were retrieved.

3 others die in gory accident on Kintampo road
Share FacebookWhatsAppTwitterPinterestTelegramEmailReddIt