Male and female students put a camera on themselves passionately k!§s!ng and smØØch!ng each other in class [Watch] 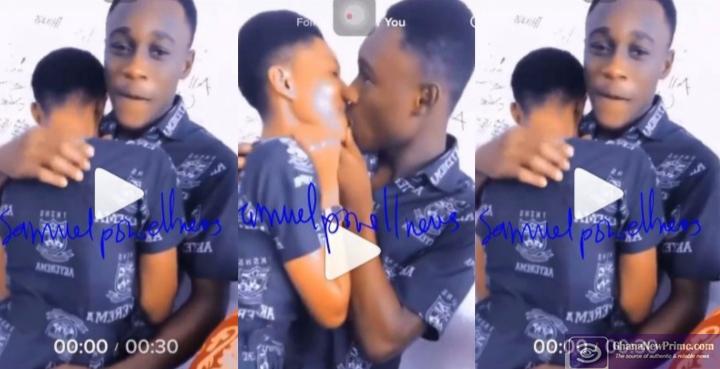 Male and female students put a camera on themselves passionately k!§s!ng and smØØch!ng each other in class.

However, some of these students appear to combine lovemaking with their education.

Parents send their children to school in order for them to gain knowledge and grow into responsible adults in the future.

Many students have been caught and punished for engaging in different love acts that are against school rules and regulations, yet the punishment appears to be ineffective in preventing them from continuing to do so.

According to the images in this post, a male and female students put a camera on themselves passionately k!$§!ng and smøøch!ng each other in class. The SHS boy hugs the girl’s behind and squeezes it lovingly.

He then grabs her cheek and kisses her passionately in the midst of their classroom.

According to their uniforms, they are pupils of Tweneboah Koduah Senior High School in Kumawu, Ghana’s Ashanti Region. It tarnishes the school’s and authorities’ reputations when students conduct such an unethical behavior while wearing their uniform.

Some may assume that pupils who are discovered in this crime are not appropriately reprimanded by school officials. They must be punished in order to teach their peers that such behavior is not acceptable in the classroom.

Check Out The Video

NSMQ: Brilliant Fransisca Lamini had 8As in WASSCE while in form 2 [Photo]

Students run for their lives after spotting large snake in…