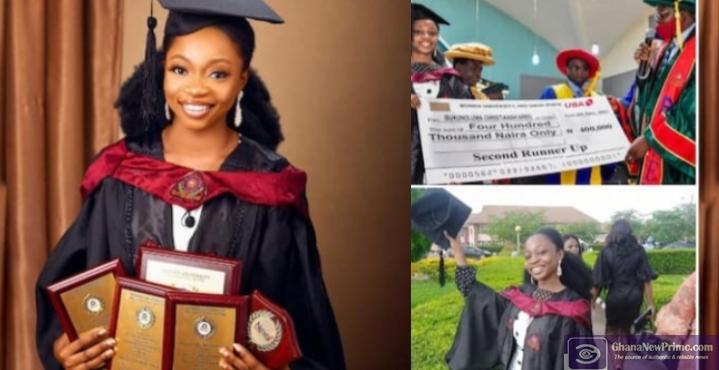 Nigerian lady expelled from OAU in 2016 for bad performance emerges as best student, wins awards, and receives $400,000 in prize money.

A woman has used social media to celebrate her great academic achievements by sharing a poignant story about her path to success.

Ibukunoluwa Areo, a lady, was expelled from Obafemi Awolowo University (OAU) in 2016 due to poor performance. She attempted to return to school after that, but was unsuccessful.

She eventually returned and ended as the best graduating student, receiving honors and a monetary prize of N400,000.

She shared gorgeous images from the convocation ceremony on LinkedIn to commemorate her academic achievement.

Her path to academic accomplishment, she noted, was not as smooth and straightforward as many might believe.

She has etched her name in gold in the Bowen University history book, graduating with honors and collecting various prizes, including a monetary reward of N400,000.

She said that, aside from being pulled from OAU in 2016, she was unable to gain admission to the university in 2017 and 2018 due to subject combination concerns and low scores.

She persisted, though, and was accepted into Bowen University, Iwo via direct entry, where she graduated with honors.

Ibukunoluwa claimed that she would rather grow than remain mediocre.

She achieved a remarkable accomplishment when she received a first-class honours degree in Economics and was named the best graduating student in her program with a CGPA of 4.84.

“In addition to my academic success, I served in various leadership capacities, the highest of which was being the Deputy Vice-Chancellor of the school for 1 day,” she said. Indeed failure is not enough reason to stop struggling and trying to make progress, rather it is a more reason while one should sit-up and try to do more. Her story is indeed inspiring. We wish her all the very best in life.