ON SCREEN: ‘I Traveled To Nigeria To Ride Okada And Selling Of Doughnuts’ – Gospel Musician. 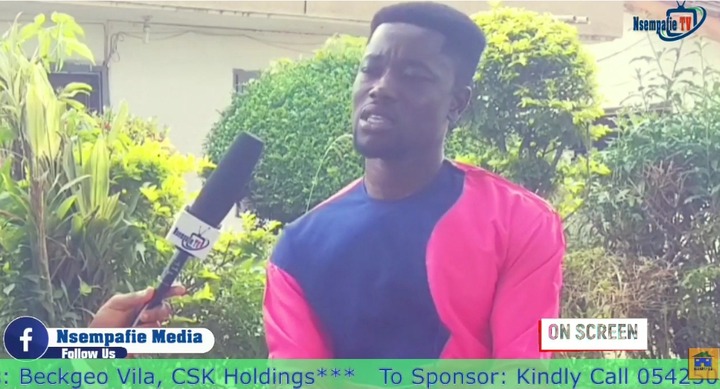 Popular and upcoming Gospel Musician, born Baffour Asare and better known in the showbiz industry as N. B Dipastor narrates his life story with a popular YouTube show “ON SCREEN” with Fada on Nsempafie TV.

The crooner of “W’aye Me Apue” speaking on his career said he traveled to Nigeria, Agege to hustle for a better life.

But things never went well for him, that he started riding “Okada” when he got to Nigeria where he was attacked by armed robbers but thanks be to God, his life was not harmed although they took all what he was having by then including money.

That didn’t bring his spirit down, he went ahead to his brother who was already living there. He was introduced to Doughnuts selling.

According to him, he sells from morning to evening before he gets something to buy food. The business was not cool with him, he left to Ghana to continue his music career.

The singer has announced to Nsempafie TV that is working on a single song which will be ready soon. The host asked him if he has a manager but he answered that he doesn’t have any and his doors are open to any one to support him.

RELATED   Captain Smart reveals why he resigned from ABN

The Young singer has appeared in “Rhema Voice” twice. The last one was this year where he was evicted in round two of the competition. Rhema Voice is a television reality show for upcoming Gospel Artistes shown on Rehma TV. The purpose is to open way and bring the underground Gospel Musicians to the limelight.

Meet the lady who’s trending No.1 on Twitter with her ‘water melons’ [Photo]

Meet the lady who’s trending No.1 on Twitter with her ‘water melons’ [Photo]

Prez. Akufo-Addo visited the Pantang COVID-19 Treatment Facility to present 10,000 bed to hospitals across the country