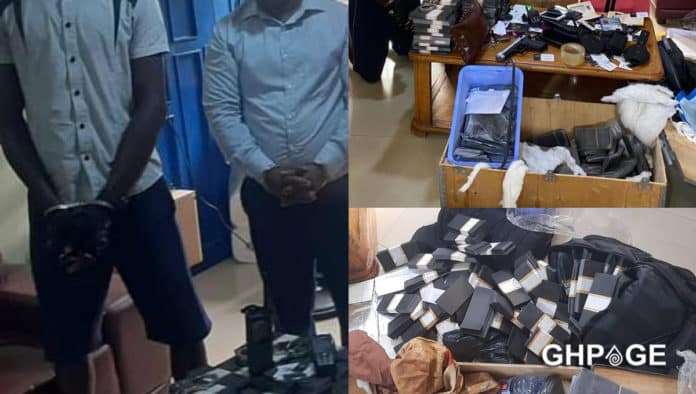 The operation took place on Tuesday, June 29, 2021, at a hotel in Dansoman upon a tip-off.

The police found in their possession 108 bundles of fake dollars, a wooden box containing 34 bundles of fake CFA currency, fake GHS200 notes in an ice chest mixed with powder and unspecified cedi notes.

They also retrieved a handgun, a statement on the Facebook page of the Police Service said.

“Police also retrieved a pistol and ice chest mixed with powder from them at their hotel room in Dansoman in the Greater Accra region. Suspects were arrested on 29th June 2021.

“The Police continue to urge the public to volunteer crime information to the Police to help curb crime.“

Video: Hilarious moment woman fights off clergyman who tried to lay his hands on her at a church programme

Emotional: ‘I was a healthy and beautiful kid until a nurse injected me’ – Physically challenged pharmacist