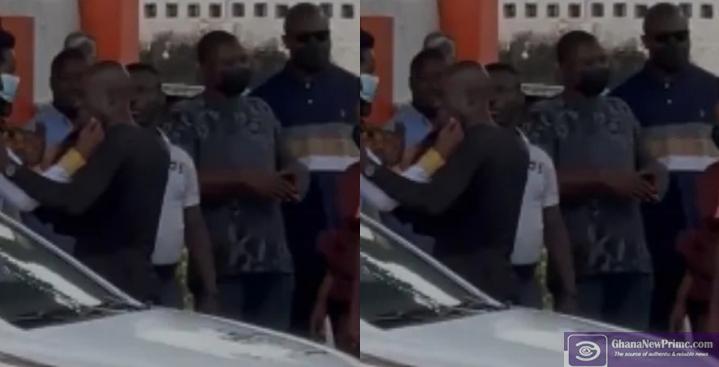 Stephen Akwasi, also known as Jesus Ahuofe, the founder and head of New Life Kingdom Chapel International, was apprehended by police on the courtyard of Accra100.5FM. Today is Tuesday morning.

His arrest is allegedly linked to his September 28, 2021 prophecy that dancehall star Shatta Wale would be shot on October 18, 2021.

The prophet was picked up by three guys dressed in mufti, with the driver dressed in a police uniform, as he was waiting to appear on the mid-morning show Ayekoo Ayekoo.

The prophet had previously stated that he intended to report himself to the authorities following the performance.

READ ALSO  Man Found Dead In A Bush At Adeiso

He’ll be brought to the Police Department’s headquarters.

Shatta Wale’s location had been unknown to the authorities, according to a previous statement.

The law enforcement agency stated in a statement that it had been alerted to a widely circulated report about Shatta Wale’s purported gunfire attack.

When the authorities learned of the news, they announced that they had begun an inquiry into the situation, which included contacting some of his close friends and family members, all of whom claimed to be unaware of his location or the alleged event.

Meanwhile, Shatta Wale claims that his life is in danger and that he is fleeing the nation until the country proves to him that there are laws in place.