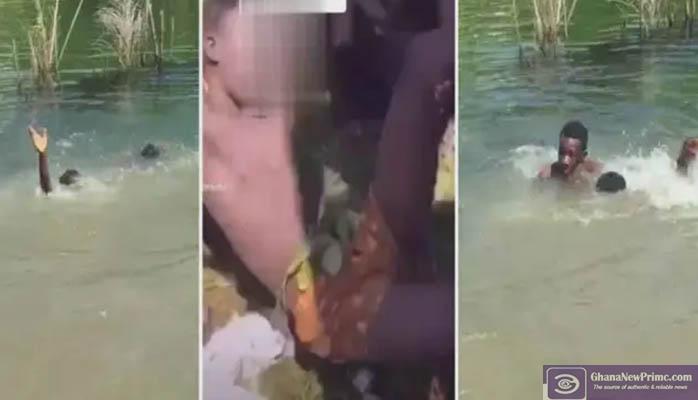 A group of young men, who have yet to be recognized, tragically drowned while swimming in a river with their pals.
After appearing on the internet, a viral video that gives a sorrowful account of the awful moment stirred indignation.

The 17-second video, which has gone viral on social media, shows at least five young men, all of whom are said to be close friends, having a wonderful time in a river on a sunny afternoon.

While two of the young men were seen swimming cautiously along the river’s shallow side, the three others chose to swim further into the steep area of the water, possibly to demonstrate their swimming prowess.

Unbeknownst to him, tragedy was about to strike. A sixth individual, who was busy capturing the great moment, could be heard cheering on his friends.

The three young men who walked far away on the impulse of the moment could be seen straining to keep afloat on the river’s surface as they began to drown.

Fortunately, one of them, only named as Ben, was able to swim ashore and join the two others who were playing safe in the shallow area. The two others, on the other hand, died.

Ben was urged to reach out to the two other buddies who were drowning by a bystander who was photographing them, but he couldn’t since he was fighting for his life as well.

READ ALSO  [Video] Days after the Ejura killings, soldiers secretly filmed chasing and beating up civilians in the street of Wa

Take a look at the video below. Sad moment as two young men helplessly drown in river while swimming

Surgery for conjoined twins is delicate, but we are poised for success- Medical Team