Surgery for conjoined twins is delicate, but we are poised for success- Medical Team 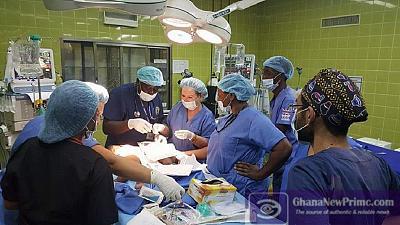 Director of Institutional Care Division, Ghana Health Service, Dr. Samuel Kaba Akoriyea says although the case of the Siamese Twins who are conjoined on the head is one of the challenging case scenarios in Medical Practice, the medical team is poised at achieving success.

Dr. Akoriyea stated that global statistics show that about 90-95% of children do not survive such medical procedures, adding the medical team would put in their maximum effort, as well as trusting in the power and goodness of God during such times.

“Statistically and scientifically we know we are before one of the worse case scenarios, when you talk of Conjoined Twins where world-wide statistics point to it that, about 90-95 % of the time we can lose both kids or we can also loose one as part of the worse case scenario, but we are searching for that 5% to have both, as human beings we have done our best, we have trained our best the rest is left to the lord.”

Dr. Kaba was speaking in an exclusive interview with GBC News, in Accra, when some members of the medical team, Pastors, and Parents of the Conjoined Twins visited the Ghana Broadcasting Corporation, GBC, to appraise Ghanaians on their preparedness for the surgery.

Specialists at the Greater Accra Regional Hospital, (Ridge Hospital), offered to perform the medical procedure to separate the set of Siamese twins, “Bansah twins” conjoined at the head.

Dr. Kaba disclosed that the medical team had in the last eight months been engaged in simulation exercises, adding the team is making final arrangements for the actual surgical procedure. Dr. Kaba, who did not give the exact date for the surgery to avoid excesses at the hospital, said the procedure would involve five stages.

“We have gotten to that point that we need to begin the surgical separation and we hope to start by next week, for now if we announce it we believe the whole place is going to be crowded. We already have one hundred and sixty-five people as members of the team and you wouldn’t want that particular moment to have everyone there, then you will have the media, everybody will also want to be there. It’s just the first stage, we are talking about five stages, but we will have a six months minimum so there will be a lot of time to talk about particular days.”

Dr. Kaba said the one hundred sixty-five medical team is a combination of people from all walks of life, including cleaners and IT Professionals.

“Everyone has a role to play, we have cleaners because when you are operating you will need the place to be clean, they started work not the day of surgery but before, we have to disinfect the theatre, we have engineers, you don’t have to wait for the light to go off, we have IT people, we have backup, so this 165 people it’s not just doctors, nurses and Pharmacists, but we have people from all walks of life.”

A Consultant Neurosurgeon at the Ridge hospital, Dr. Emmanuel Voado, said the case of the twins conjoined on the head is complicated because their brains are intertwined. He added at a point the twins share a blood vessel which also requires separation. Dr. Voado said the surgery will span six months because the twins would have to recover from one stage before moving to the next step.

“At some point they seem to share the same blood vessel and that’s the challenge, so after all this is done then we will start reconstructing the outer covers of the brains, the bones and now the skin for each twin brother to have a separate structure. They have two different brains but the particularity is that the brain of one twin has entered the skull of the other twin and vice versa, it is going to make it complicated and that is why the separation is in steps”.

Dr. Voado said the team is confident of a successful surgery without any complications.

“Humanly speaking we may lose one or lose both, but with God all things are possible and I’m only rooting for the perfect scenario which the whole of Ghana is rooting for, that the two kids will be perfectly separated and they will not have neurological deficits for the glory of God”.

Touching on the role of the Church, a member of the team, Rev. Dr. Gordon Nkesieh, said the case of the twins and the need to support them in prayers is a national call. He said prayer warrior teams would be mobilised at each stage of the process.

“We will serve as the spiritual part of the whole operation, we are going to set up prayer warriors who will cover every stage of the operation because this is a national call”.

Mother of the twins Justine Bansah, who said she never anticipated the case of her twins to get national attention said she was not aware they could be operated on.

“When I gave birth to them I was afraid because I didn’t know they could operate on them, but now I have faith in God, they are fine and I am always with them.

Madam Justine said people believed the twins were a curse, but she had unwavering faith in God.

“Some were saying that it is curse, maybe I had wronged someone, and I will say it is not like that maybe it is from God, who wants to deliver me from something that is why it has happened like that”

For his part, father of the twins Samuel Addo said he was quite afraid, when the babies were born, having to see such a marvel for the first time.

Statistics show twins conjoined at a part of the body occur once in every 2.5 million births, 60 % of the patients die in the womb, while 30% are delivered, but die at birth.

The “Bansah Twins” is Ghana’s first case of Siamese Twins conjoined on the head.

Government has taken up the cost for the surgery to be carried out at the Greater Accra Regional Hospital (Ridge). The total cost of the surgery is GH¢15million – GH¢12million for equipment and GH¢3million for consumables.
Source: gbcghanaonline
Send your article and other stuff for publishing to [email protected] Via WHATSAPP