Driver of the tragic Akumadan accident has been remanded 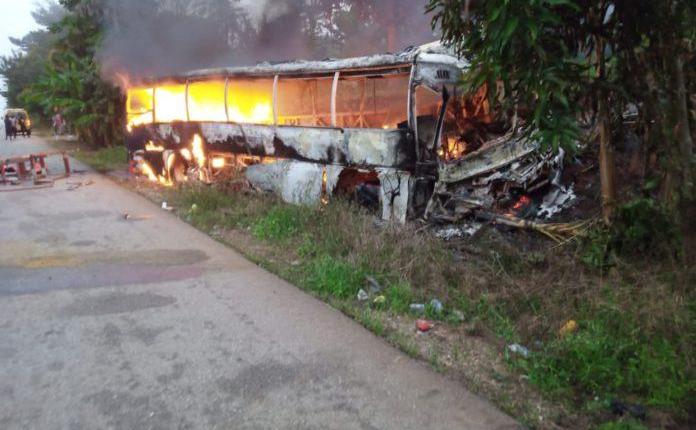 The driver of the tragic Akumadan accident has been remanded. The bus driver who is suspected of causing an accident in Akumadan on Tuesday, in which six people were burned to death, has been remanded in police custody by the Offinso Circuit Court in the Ashanti Region.

On November 19, 2021, he is scheduled to return to court.
Shortly after the event, the driver fled, but he later turned himself in and was apprehended.
Preliminary investigations by the prosecution suggest that the defendant ignored warning warnings from passengers and police officers at a checkpoint before the collision.

As a result, he has been charged with reckless and inconsiderate driving as well as negligently inflicting injury.

He couldn’t escape a head-on collision with a halted Kia Rhino Truck parked at the Police roadblock due to his speed.

Following the crash, the Yutong Bus he was driving took fire, resulting in six individuals being burned beyond recognition and 22 others suffering various degrees of trauma.

[Watch]: Are you crazy? – Mensah Otabil berates Christians who are in the habit of ‘tapping’ from other people’s grace