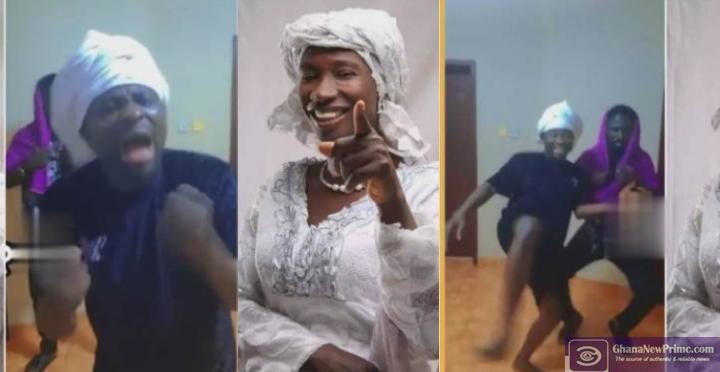 Brother Sammy, a Kumasi-based gospel artist, has been seen in a new video making Cecilia Marfo, a renowned gospel singer and prophetess.

Cecelia Marfo, Brother Sammy’s archenemy and a member of the Gospel music industry, recently made a major blunder while attempting to sing a song.

She mispronounced the song’s lines, which has now become a tiktok craze among Ghanaians, with many Ghanaians imitating her.

Brother Sammy, who likewise has a limited grasp of the English language, chose to taunt Cecelia by imitating her.

In recent months, the two gospel performers have been at odds over a video that went viral on social media purporting to show Brother Sammy being liberated from evil spirits.

According to reports, the Prophetess, who was praying for the musician, forcibly removed a number of necklaces he was wearing and warned him to stop doing silly things so that God might use him.

READ ALSO  Demons From Moesha’s Past Is Haunting Her – Prophet Kumchacha Reveals The Secrets (VIDEO)
Jan 24, 2022

Cecilia Marfo was seen in the heat of the delivery giving up some hefty’slaps’ to Brother Sammy in a video that went viral on numerous social media platforms.
Although the artist first denied getting slapped by Cecilia Marfo when relaying his story days after the incident, he has since changed his mind.

Cecilia Marfo’s manager, commenting about the incident lately, stated that Cecilia Marfo smacked Brother Sammy on purpose, claiming she was rescuing him from bad spirits.

Brother Sammy’s manager, Kofi Nkosuor, told Kumasi-based Hello FM that Cecilia Marfo has no capacity to cast out bad spirits, and that he will personally smack her.

Take a look at the amusing video below; Video of Bro. Sammy making fun of Cecilia Marfo goes viral