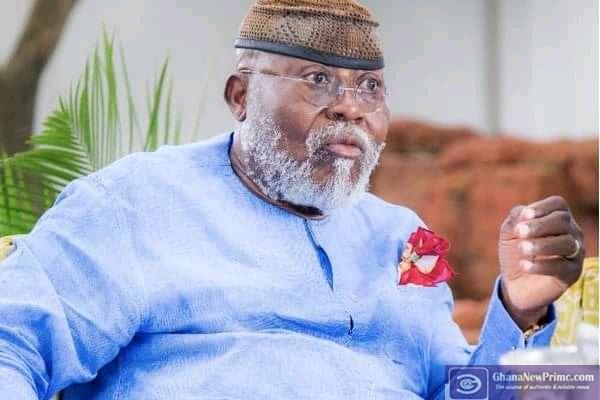 A founding member of the governing New Patriotic Party (NPP), Dr Nyaho Nayho Tamakloe has said the way and manner the nominees for the position of Metropolitan, Municipal and District Chief Executives (MMDCEs) were confirmed showed that President Nana Addo Dankwa Akufo-Addo Dankwa is the most lawless President ever in Ghana’s history.

According to him, the assembly members who have been empowered by the constitution to confirm or reject the nominees were unable to cast their ballot without fear or intimidation.

This development, he said, should not be swept under the carpet because in his view, they have taken the country back.

He told journalists in Accra on Thursday October 28 that “Permit me to say without any fear of contradiction that Akufo-Addo is the most lawless president Ghana has ever had and does not believe in rule of law.

“This act of his, in recent times, has found its way in our local government system. The district, municipal and metropolitan concept, as we all know was established a year after the first democratic election in the fourth republic to help decentralize activities of local government into our localities for proper and drastic development.

This part of our country’s development requires free and fair election process to enable people’s representatives at the assemblies who are responsible to determine who is confirmed in the respective assemblies as the District Chief Executive, cast their votes without fear or favour .

“The composition of our assemblies are made up of experts, elected assembly members from the various electoral areas within the district, chiefs and opinion leaders. These people are expected to be people of integrity, conviction mature and above all, with the development of their localities at heart.

“These people, per our constitution must at all times be allowed to vote for or against any government appointee who is nominated by the president without any interference or oppression or compulsion but by their own conviction. This is the sole right given to the assembly members for which no one shall influence in any shape or form i.e by threat , intimidation , assault or pressure that will interfere with the exercise of such rights.

“What do we see today? This government led by Nana Addo has taken our dear nation back. Looking at happenings in the recent confirmation of Chief Executives at the various assemblies. These acts cannot be grossed over as a nation because it is undermining the democracy that we have enjoyed for the past twenty eight years and still counting.”

It is recalled that the National Chairman of the National Democratic Congress (NDC), Samuel Ofosu Ampofo claimed that elected assembly members were denied their constitutional right to endorse or reject persons nominated for the position of MMDCEs in the country.

Without mentioning the areas where these happenings are taking place, he alleged that in some areas, the military and other security officers are being used to block some assembly members from having access to the auditorium where the voting is taking place to perform their duties.

He made these allegations when the presidential candidate of the NDC in last year’s elections, Former President John Dramani Mahama met the Eastern Regional House of Chiefs as part of his thank you tour on Tuesday October 12.

He said “You recall that His Excellency President Akufo-Addo sometimes in the last term, proposed amendments to the Local government Act and proposed that the local government system should be partisan. Those of us here opposed vehemently that we will want to persevere the nonpartisan nature of our district assemblies. So, there was a very intense debate when a referendum was proposed and because of the position that we canvassed and convinced Ghanaians finally, the president had to withdraw and then referendum never took place.

“Recent development in the appointment and approval of MMDCEs vindicate our position that if we make local government system partisan we will further polarise this country and we will to be able to even put our citizens together to undertake development projects .

“Why am I saying so? Only last Sunday in one district assembly when 38 people were supposed to go and endorse municipal, chief executive on Sunday some government appointees were put together and one or two people were added and military and security agencies provided them escort to go and approve somebody who has been appointed as a DCE.

“The elected assembly members were prevented from exercising their constitutional right and this is a sad commentary for local governance which for me is the heart beat of the chiefs when it comes to the governance architecture of this country.

“It did not happen in that place alone, in several other places elected assembly members are prevented and because the clause says that two thirds present and voting so they will he elected members and cordoned off a few people and say they are the only people who came and they have voted and so somebody has been declared the DCE.

Mr Ofosu Ampofo was not the only one making this claim.

According to the MPs, Kweku George Ricketts-Hagan of Cape Coast South and Kwamena Mintah Nyarku of Cape Coast North, the NPP had devised several means to ensure that Ernest Arthur is forcefully confirmed.

Mr Arthur, popularly known as Mayor 1, needed only four votes on Wednesday, October 6 in a second voting on his renomination to be confirmed Chief Executive.But not even an impassioned gesture by the Central Region Minister, Marigold Assan, will move some assembly members to vote for him. Others had accused NDC’s Ricketts-Hagan of masterminding his defeat.

He had polled 34 ‘Yes’ votes in the first voting on Monday, September 27, a marked departure from the 99 percent he polled in 2017 when he was nominated for the first time by the president. Arthur was subsequently confirmed under circumstances that were heavily criticised by observers.

Addressing journalists on Monday, October 11, the day initially rumoured for the third and final voting, the two NDC MPs said the two-time rejection of Mr Arthur is a clear indication that he is not wanted by the good people of Cape Coast as mayor.

“There is no law in the constitution that the President should re-present or renominate the candidate. However, the President in his prerogative can renominate a failed nominee,” former Deputy Finance Minister Ricketts-Hagan admitted.

Crypto is used by 48% of Africans to fund their children’s education.

I break hearts for a living – Olamide