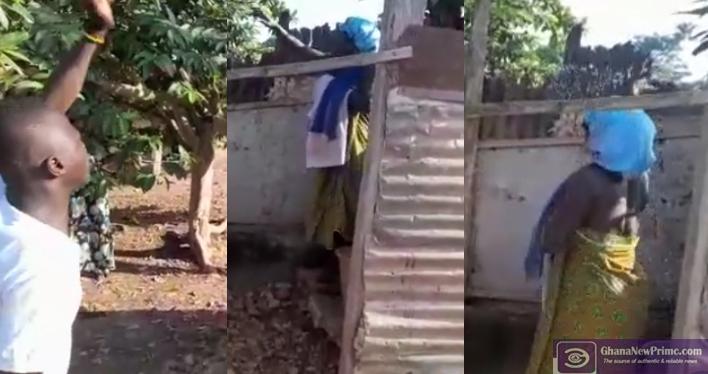 Woman sacks communicators to pave way for her bath.

Technically communication companies expect their clients to have a smooth calls, browsing and transactions to effect pay as you go services but some people in some part of the country aren’t experience such when they want to communicate with others.

One of such towns who is experiencing lack of accessing to mobile Network is Danso krom neary Kwahu Praso in the Kwahu South Municipality of the Eastern Region.

According to the communicators who visited their friend in the village to mourn his father said they have spotted one particular place that can allow them to access to network for their calls and transactions, but the woman also argue that her bath time is due and she can’t wait any longer for their calls.

Some of the visitors and the residents at Danso krom bemoan said that, lack of access to network is impeding their development and growth as a town. Therefore, they appealed to the government through the communication ministry, the Municipal Chief Executive for Kwahu South Municipal Assembly Hon. Emmanuel Atta Ofori Senior and the Member of Parliament for the area, Hon. Davis Opoku Ansah (OPK) to help them get some of the Tele-communication companies to build their network poles at Kwahu Praso the nearest biggest town that can allow them to access a network for their calls and transactions to improve their lives of living in the area.

My Vajejey is very sweet, you must service me over 40 minutes plus and not less than 4 r0unds – Shugatiti